Deaf people in Ireland did not only receive charity - they contributed to it.

In 1870, Prussia and France went to war. The Franco-Prussian war was one of the moves towards a unified German Empire. But the world was shocked at some of the cruel behaviour of the Prussian troops in France. Collections were made around Ireland to assist the injured French troops.

Among those who contributed in Wexford - two Deaf men, William Hendrick and Nicholas Brien. They each contributed 1 shilling 6 pence. William had entered the Prospect School in Glasnevin in 1854. Nicholas entered St Joseph's in 1864.

Old Lisnaskea Workhouse - Reluctant to Send the Deaf Children to be Educated?

The old Lisnaskea Workhouse, Co. Fermanagh. It is now mostly derelict and surrounded by the Lakeview housing estate.

Not many deaf children were sent to Cabra from Lisnaskea Union - just four before 1914:

This may be because the Lisnaskea guardians may have been reluctant to pay for their local poor deaf children to educated. In 1905, a local Protestant churchman applied for the Lisnaskea Guardians to send young Henry Delmore to the Ulster Institution for the Deaf and Blind.

But one Guardian - named Plunkett - disagreed. He said that the Church should cover the costs, not the Union (although hundreds of deaf children had been sent and paid for by Poor Law Unions in the preceding decades). The Board finally agreed to pay just £5 a year for Henry's fees, and for a limited time.

A few years previously in 1899 Plunkett had raised a similar objection to another deaf child and again suggested the clergyman should pay.

Cornelius Flahavan: a Deaf Life On the Road (DHC Conference) 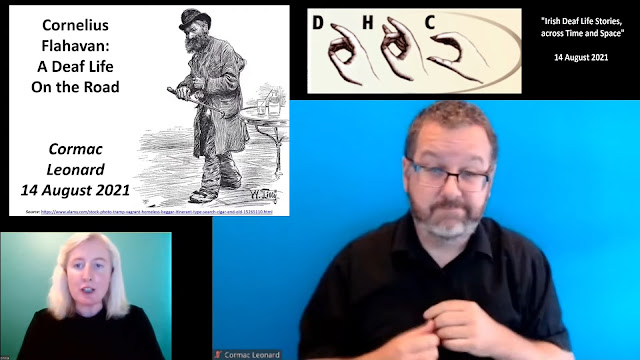 On 14 August I presented for the Deaf Heritage Centre's online conference. Have a look at my presentation by clicking above.
- October 27, 2021 No comments:

Many people assume (wrongly) that people were forced to enter the workhouse and were not allowed to leave. However, sometimes, it was the opposite.

In 1913, a 'deaf and dumb' man was admitted to Clogher workhouse. The night he was admitted, he burned all his own clothes. Then, he wrote on a slip of paper and gave it to the workhouse master; he asked for a new outfit of workhouse clothes, cap, boots and a shirt. "I like to stop here", he added.

However the Board of Guardians of Clogher Union were not too keen that he stay. The man was given work to do and the Master tried to get him to leave the house within a week.

The old Mullingar Workhouse (now St. Mary's Care Centre), Mullingar, Co. Westmeath.
In 1858 there were several attempts by paupers (workhouse inmates) to set fire to the Mullingar workhouse. The crimes were witnessed by other male paupers sleeping in the same dormitory.
An inquiry was held in November into a number of charges against male paupers there. None of the witnesses gave evidence willingly - except a Deaf boy who was an inmate there. 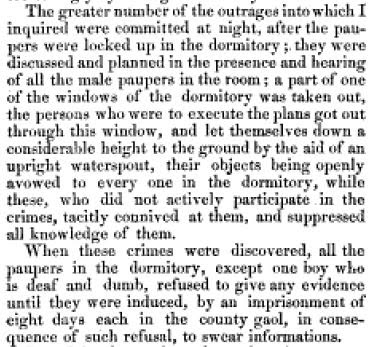 It was also reported that the Deaf boy was the only witness there who was able to read and write well.

Lisburn Workhouse: A Deaf Boy's Education Hangs in the Balance

Thomas Burns was an 8 year old deaf boy living in Lisburn in 1889. The Lisburn Board of Guardians (who met regularly in the Workhouse and ran it) were asked to pay for him to go to Cabra to be educated, as his parents were very poor and could not afford to have him educated. His behaviour was wild and becoming a nuisance around Lisburn.
Some of the Board of Guardians were very willing to pay the £15 a year to send Thomas, but others passionately objected. They thought £15 was too expensive and that Thomas should be admitted for free. Others believed he should be sent to the deaf school in Belfast, as it would be cheaper, and local Protestant Deaf children from Lisburn had already been sent there.

It was proposed that £10 be offered to Cabra to pay for Thomas' education. But Cabra replied and said that they had to insist on the full £15 from every child sent. So, instead, the Guardians offered to pay £15 - but for only two years. Cabra reminded the Guardians that two years was not at all enough time to educate Thomas properly.

Thomas was eventually admitted to Cabra in October 1889. However, he did not stay there long. He suffered from many epileptic fits and had to be returned home to Lisburn.
Sources: local Lisburn newspapers - please contact me if you need references
See http://www.workhouses.org.uk/Lisburn/ for more information on the workhouse.
- June 21, 2021 No comments:

A Deaf Blind Workhouse Inmate, sentenced to a month's imprisonment in Galway

A story about Michael Curley - a Deaf-Blind man - sentenced to 1 month in prison - for disorderly conduct in Galway workhouse. "At Galway Petty Sessions, Michael Curley, a blind man, was charged by the Galway Board of Guardians with disorderly conduct in the Workhouse on the 4th October. Mr. O’Toole, Master of the Workhouse, stated that Curley had gone into the workhouse 25 times since last January. On the 4th ult., witness saw the windows broken, but did not see the defendant do it. Defendant was a great nuisance. Cross-examined, witness said he was aware that defendant was both blind and deaf. Mr. Hanley, porter of the workhouse, deposed that on the night in question, he heard knocking at the door and the noise of windows being broken. When he opened the door, he found the defendant there, having climbed the outer gate. Defendant was a very great nuisance; came in under the influence of drink often, and kicked up rows. The Chairman inquired how it was that the defendant’s people managed to communicate with him, or how he got on if he went into a shop. Mr. Daly (defending) contended that the case could not be maintained, as the defendant was deaf and blind, and, therefore, unable to plead. It was a case in which the defendant ought to be sent to a suitable institution for the deaf and dumb. Sergt. Cunningham said the man had a very significant manner of making known his wants when in a shop, by tapping on the counter a certain number of times with his stick (laughter). He had already done a month in jail for begging at Salthill. The Chairman said the only place to which they could send the defendant was the prison, as they had no power to send him elsewhere. He would be sentenced to a month’s imprisonment." Source: Connacht Tribune, 14 Nov 1914 - see also https://connachttribune.ie/galway-in-days-gone-by-566/
- February 26, 2021 No comments:

To see the original Facebook post, please click here.
An ISL Deaf history vlog (with English voiceover and subtitles) where I look at some evidence of Deaf education in the 1860s in Tralee, Co Kerry. A Sisters of Mercy convent school apparently had some Deaf pupils educated through sign language...

'Another Silent Individual': a Deaf Interpreter in Foynes, Co Limerick in 1867?

To see my original Facebook post, click here.
ISL video with English (voice), automatic subtitles - proper subtitles soon.
Another possible Deaf interpreter in Ireland! This time - 1867 in Foynes, Co. Limerick... but is the evidence strong enough to say Cornelius McMahon was a Deaf interpreter?
- May 19, 2020 No comments:

I was surprised to hear that I was mentioned on Ryan Tubridy on RTE radio this morning!
He was interviewing the brilliant Fin Dwyer, who interviewed me two weeks ago for the 'Irish History Podcast'. Ryan was very interested to hear more about Irish history.

I did a short ISL version of what Ryan and Fin talked about. English voiceover and English closed captions.

[Ryan Tubridy] .... It's fascinating, and just to remind people, we’re walking to Fin Dwyer the man behind – it’s Irish History Podcast, is where you need to go, this is just a flavour of where your stories go, because it's so broad as a church. In fact the other one I was listening to the other morning was the history of the Deaf community in Ireland - and I had no idea that people at one time thought that Deaf people were considered to be psychics!?

[Fin Dwyer] Yeah the actual back story to this is interesting; I lie yourself had no idea, never really thought about the history of the deaf community, and then Cormac Leonard a researcher from Trinity College contacted me about signing a podcast I'd made on the Aran islands, and it was just through that - I was looking at Cormac’s website and I just started to think about this, I'd never really thought of the deaf community and their role in Irish history. So I asked Cormac would he do an interview, and it was one of the most eye opening interviews I'd ever done! It brings to the fore all these - first of all, the way deaf people were viewed before the 19th century, in this role as mystics, maybe, and fortune tellers. And then the 19th century where you get the emergence of sign language in deaf schools, but he also talks about really interesting stuff like, people for example from the deaf community involved in the IRA, involved in the Unionist movement in the early 20th century; and then just things lie how do Deaf people navigate the workhouses and particularly prisons. Because we've a tendency - even today - to maybe infantilise deaf people and think that they don't have the same experiences as hearing people, but definitely Cormac on the Podcast really brought out how essentially, deaf people have all the same experiences, but then often face the barriers, because people dismiss them.

Two deaf-blind brothers, David and Thomas Bowen, are arrested for begging in 1869 in London.

The Rev. Smith interprets for them with some difficulty, having to use tactile manual alphabet.

They are from Llandudno in Wales, and their father had died. They had stayed in the Llandudno workhouse but were not happy there, and went to London instead to beg. While in London, they were robbed of their money while staying at a lodging-house.

The magistrate orders them to be sent back to Llandudno, which upsets the two brothers greatly, as they disliked the workhouse so much.
- May 05, 2020 No comments: 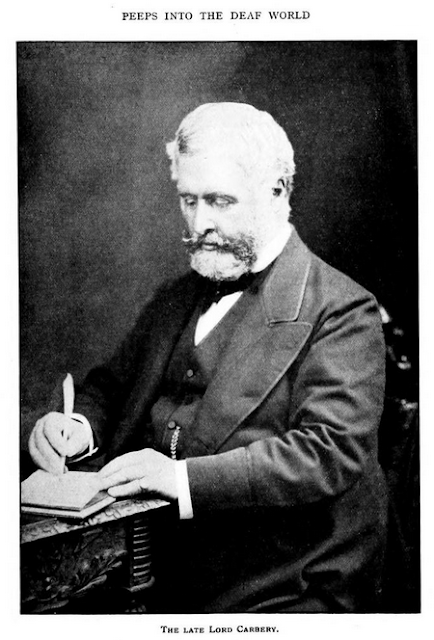 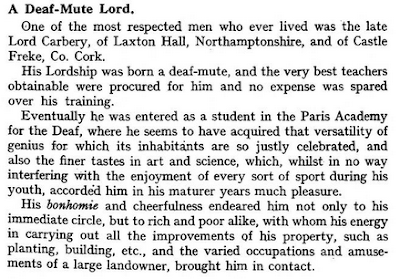 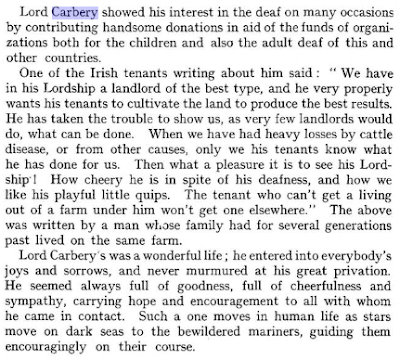 George Evans-Freke (Lord Carbery), 1810-1889 - an Irish Deaf member of the gentry. Educated in the Paris Deaf school and lived in Bandon, Co Cork (as well as London). Because he was Deaf he was unfortunately not permitted to manage his estate by himself - a group of Trustees managed it for him. He was from a Protestant family but contributed to the Catholic Institute for the Deaf, as well as the St Saviours church for the Deaf in London.

On This Day, 72 years ago... Deaf Tailor seeks Deaf Worker

On This Day, 72 years ago:
A job offer specifically looking for a deaf tailor.
It may have been placed there by a Deaf tailor who wanted a Deaf co-worker alongside him.